First of all, I would never thought I’m going to write about JAVA GC. I’m not a JAVA guy, everything described in this post is my personal experience from the operational stand point. I hope it will be useful for some of you as well.

Quick summary for those who wants quick answers – Make sure to use Java 1.7u25 (Oracle preferred) if you are running any java app in production.

Yep, I know it sounds a bit silly, but that actually a very first thing you should try, before starting to play around with GC tunning knobs.. It should solve 90% of Garbage Collection problems for simple use cases.

Important – if you are doing indexing of your hosts, then you should use 1.7u25 (not the newer one like you may think). Why? Because of the bug in one of the recent versions of JAVA. That’s according to some smart dudes on IRC.. ) Thanks guys! Anyways, maybe that bug is fixed, so try newer versions on your own risk..

For those who still here with me and wants to know more – carry on.

At FastCompany we use Solr extensively, we even use it for both index lookups and data store. We started with one Solr box and it was fine for a while. Occasionally though, we observed strange Solr pauses, which would freeze our apps. After doing some profiling we discovered that those pauses were caused by java garbage collection, right when java process memory was about to cross the allowed limit.

We also discovered that once Solr will go to GC phase, it would never recover (CPU would stuck at 100%), partly because of queries flood from our backend severs ( and retry policy – you need to be very careful with retries! ) and partly because of poor GC implementation.

At that moment we were using Amazon AMI with OpenJDK Java 1.6

As our traffic and index grew those problems started to show more often, so we would have to restart Solr process almost every other day.

At some point I’ve got enough of that and decided to learn a bit about JAVA GC to find a way to make it more reliable.

One of the most important tools I used to observe Java process behaviour was jconsole. I had to add couple switches to JVM so I could connect to the process from my local workstation:

One important note for AWS users – make sure you open all ports for your IP in the security group, because jconsole strangely chooses random port when you connect to it and use it for further communication..

Here is how our jconsole graph looked initially (well, actually we did reduced heap from 4GB to 1GB here, but still use Java 1.6): 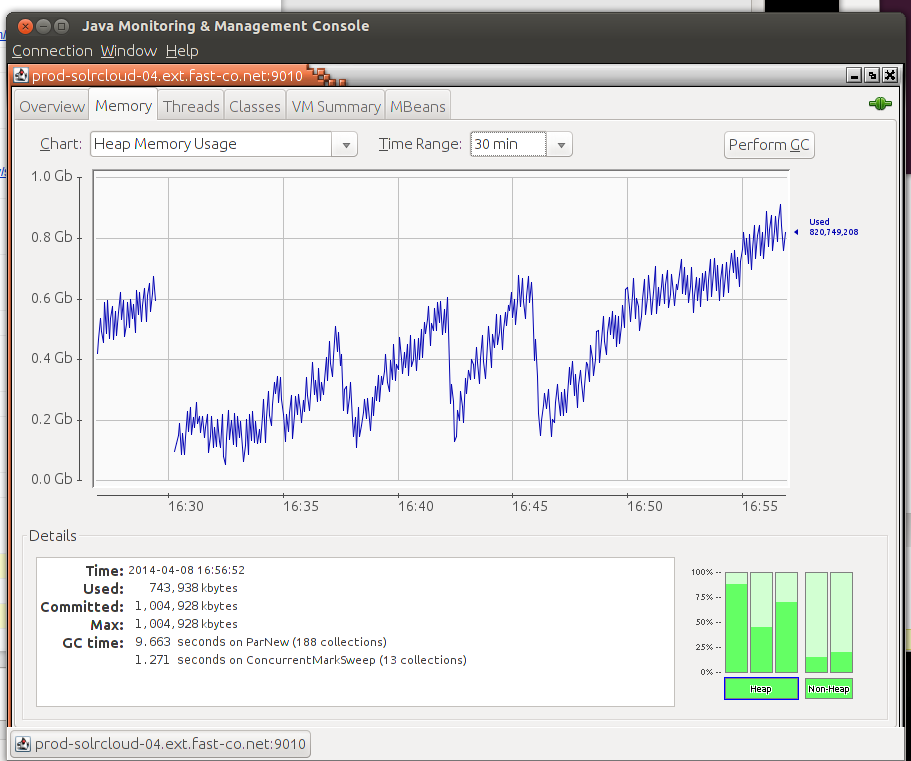 Jconsole is very useful to discover current state of the process, but if you need historical data, you should consider SPM from Sematext. It’s a paid service, but I think it worth it (especially if you running multiple boxes). It was a breeze to install and use. 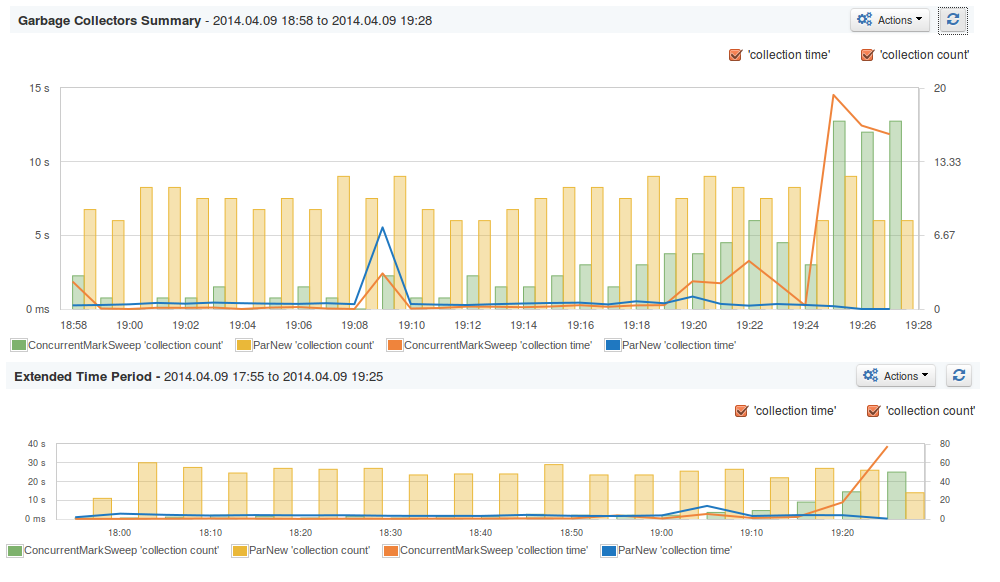 While I was working on the problem, I discovered this great post about Solr Performance tuning. Will quote a line from there:

You want a heap that’s large enough so that you don’t have OutOfMemory (OOM) errors and problems with constant garbage collection, but small enough that you’re not wasting memory or running into huge garbage collection pauses.

If that OldGen space get’s full, it could trigger STOP-THE-WORLD garbage collection process, which may take a long time to run ( depending on your heap size ). The funny thing is that you can’t schedule GC to a specific time, it’s all Java’s black magic!

Actually you don’t need very long pause to kill your app. If you do a lot of queries per second even a slight pause can throw you off balance..

Before I started changing java options we had 4GB heap for 1GB index. Because GC in Java 1.6 wasn’t working properly and didn’t reclaim OldGen space, it would grow to 4GB and would start full GC cycle which would kill our site.

After observing jconsole graph for a bit (and talking to some core contribs on IRC 🙂 ) I discovered that my lows on ther graph were well within 1GB, so I set -xms and -xmx to 1GB instead of 4, to make GC a bit faster, since it needed to do less work.

At FastCompany (and CO sites network) we do around 300 queries per second ( you can get that metric either from Solr Admin UI ( choose core –> Plugin Stats –> QueryHandler –> /select or wherever you use ) or SPM Console. Because of it I increased Eden size a little bit (using -XX:NewRatio=1), to minimize collections there.

The graph started looking like a chainsaw ( see above ), those sharp downs are Sweep Collections. If you look more closely though, you’ll notice that memory utilization increased over time. I had no idea why Sweep GC would not reclaim OldGen space.. I’ve tried numerous GC switches I find online and nothing actually worked.. Then I followed multiple advices on IRC and upgraded to Java 1.7u25. After that my memory graph stabilized and started looking like this (also SMP graph):

So as I said in the beginning of the post – you should try to upgrade first and see if it fixes your GC problems. For us it was the game changer.. Since the upgrade we didn’t need to restart Solr any more!

Here are some other switches we use:

Looking back at what I wrote, I’m not sure if there will be any usefulness out of it.. 🙂 It still feels like I just touched the basics and some real Java guys are probably going to laugh at me. But hey, who cares right?

I’ve been involved in software development for the past 12 years.

I wrote A LOT of code.

I orchestrated thousands of servers.

I helped to build and maintain the infrastructure for Game of Thrones, the biggest and most popular show in the world.

Do you want to know the single most important thing that I learned over the years?

NONE OF IT REALLY MATTERED…

Yes, it was fun for a while.

Yes, like most of us engineers I was making good money.

But at the end of the day, I would still have to show up at work and sell my time.

Sometimes I would come in, sit in my cubicle and dream about things I could do instead of staring at the screen all day long…

I could go to the beach with my wife and my son.

I could fly to El Classico game in Barcelona with my brother and watch Messi scoring amazing goals.

I could organize a surfing trip to South Africa and other awesome places around the world. Places I’ve never seen.

I could work on my own projects that would make the impact in the world or at the very least, make me some money.

Hell, I could just sit home and do absolutely nothing!

The tipping point for me was when I started buying games on Steam and GoG and playing them in my mind.

Nothing to install, no need to upgrade video cards, no need to feel bad in front of my wife, no time to waste…

You are right, I was spiraling down and needed a break, but more so I felt like I needed some radical changes in my life.

I’m sure you heard this saying before: “Insanity: doing the same thing over and over again and expecting different results”

It became clear that the road I was walking on would lead me to mediocre life.

The problem was that I didn’t want to be mediocre. I wanted my life to be awesome, full of fun, happiness and excitement!

I wanted to make a difference in the world, leave a legacy, make my kids proud, live without regrets, discover my true purpose.

So about a year ago, I set out on my new journey…

I left my old comfortable job, attended multiple high profile non-technical events (including Tony Robbins UPW), joined an expensive business program, hired a personal coach and mentor, met a bunch of people who were able to disconnect from the Matrix and never looked back.

And let me tell you – there is another world out there, something we technical guys don’t get to experience!

Now, here is my question for you:

Do you want to continue to be just a tool in someone else’s hands or you want to upgrade yourself and become a Rain Maker?

If you want to find out who you really are, take full control of your life, step outside your comfort zone in order to grow physically, mentally and financially and help others along the way, then the Red pill is for you. Just drop your email in the field below and we’ll be in touch.

Take a Blue pill and you will forget that we ever met. You will close this popup and continue reading articles about Nginx, Kubernetes, Docker, secretly dreaming of life that you could have… (or pathetically thinking that you will have it one day just by perfecting technical skills)

The choice is yours.