Last week was a bit of a wild ride for me. The fishing trip that I mentioned in the past finally happened and we drove for about 5 hours to the Salmon River in hopes to catch some Steelheads.

It was raining, cold and dark when we arrived to our destination, but when I stepped into the small house that our friends rented the day before, I felt this unique fishing spirit. Check this out. 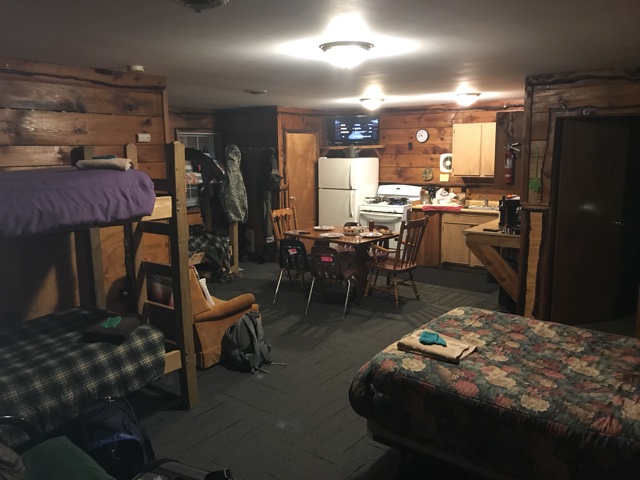 Exactly like I imagined it in my head! The room was warm and cozy, filled with the smell of fried potatoes and garlic. The table in the middle of the room was set up with fresh tomatoes salad, fat pieces imported from Belarus and Ukraine and of course a bottle of homemade vodka (also called “samogon”) produced in Brooklyn by some greek immigrant from the special hundred years old secret recipe. 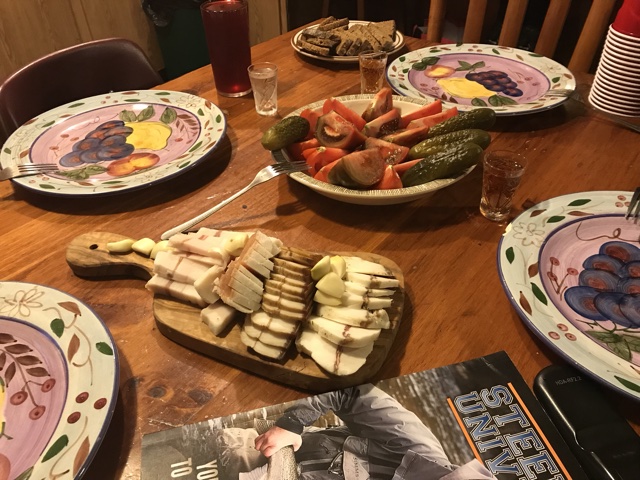 It was just awesome. Totally worth the long ride. Two of our friends who arrived the day before were not as happy though. Apparently because of the heavy rains in the past two days the water level in the river raised and the fish stopped bitting.. A bummer.

They hired “a captain”, basically a local dude with the boat, in hopes to discover the fish but it didn’t produce any results. After a day of fishing, they were unable to catch even a single fish! Definitely not something that I wanted to hear.

There were still a few days in front of us, so I wasn’t too concerned, especially with all the awesome food on the table.

I had to violate my diet a bit as I just couldn’t resist the smell, plus we were very hungry after the long trip. They guys who invited us shared some awesome fishing stores and showed us some fishing journals with beautiful pictures.

It was dark outside when we woke up next morning and it was still raining… Definitely not a good sign, but hey, there was nothing we could do about that. I put on my waders and boots with metal spikes and was generally excited. It was my first trip after all and no rain could lower my spirit. Not yet.

Because of poor fishing conditions, my friends decided to hire the local guide yet again in hopes that he would show us some places where we could actually catch something. The guy arrived promptly at 7am and we set out on our trip.

After about an hour of driving, we arrived at our location, took all of the equipment and started following our guide through the trees and bushes all the way to the water. All of the good spots were already taken so we had to go deep into the wilderness. 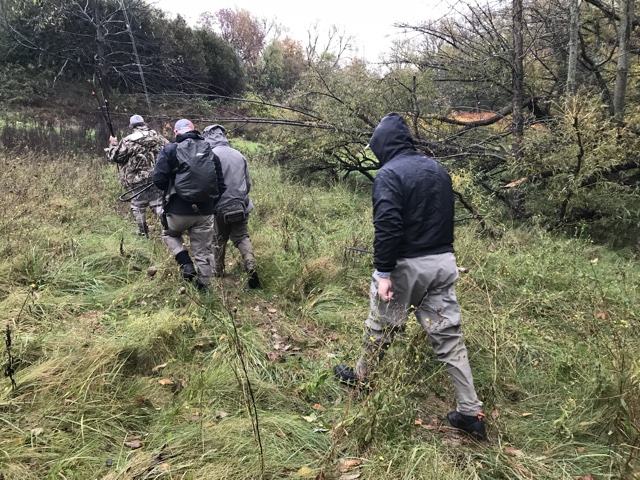 At some point, we actually had to cross the creek. It was waist deep, but the water was moving so fast that it almost washed me downstream.

Finally, we arrived at our spot and started fishing. I made the first cast and saw my float go under water. I thought my hook probably got some stone on the bottom and reeled it in. It was the fish, not the stone! It started jumping out of the water and got off the hook easily because I didn’t really set it properly…

That was our first and last fish that took a bite that whole day.

There was an old guy who was fishing across from us, who was consistently catching fish. My friends guessed that he was using some sneaky techniques. Not sure, maybe he knew something we didn’t, but what I liked about him was that he donated one fish that he caught to our less fortunate crew 😉 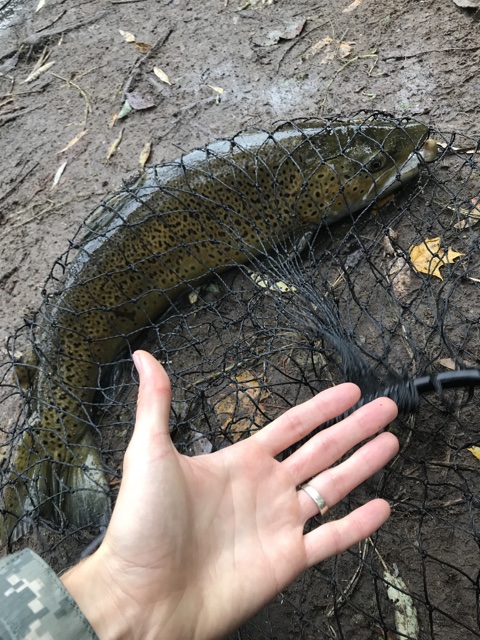 The next day we hit the famous Salmon River. The water was still high and it was raining pretty much the whole day again. All of us got wet to the bones… The worst part was that we didn’t have even a single bite…

I saw a lot of dead fish everywhere. Every single salmon that gets into the river to lay the eggs dies afterward. No kidding. Check it out. 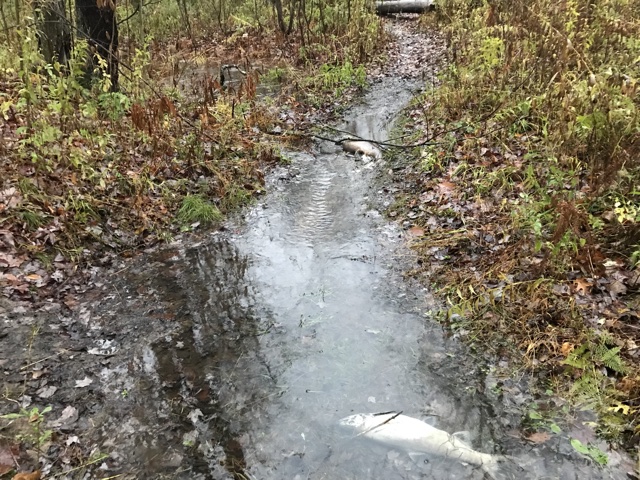 There it was, my first fishing trip that I imagined for so long. Five hours of driving and two days of fishing and not a single bite. Well, technically I had one bite the very first day.

Anyway, as you can tell, the fishing was “not ideal” but hey – it is what it is.

When I sat down to write this post, I actually wanted to talk about something else. Like I mentioned before, it took us about five hours to get from NY to the fishing spot which was close to the Ontario Lake.

There was just two of us in the car, so my friend and I had plenty of time to catch up. We discussed pretty much everything ranging from work-related stuff (software engineering) and family updates to business ideas and projects.

Everyone has something going on the side right? No? Well, then you have some work to do, otherwise, you risk staying in the Matrix for a looong time…

What caught my attention was one real estate project my friend recently got involved with. I won’t go into too many details here, but as I started asking some specific questions, it became clear that he didn’t really have all the answers. The only reason behind the deal was the potential quick big payoff.

There were quite a few red flags that were apparent to me from the outside, but my friend was just too deeply involved and excited by the potential to notice them.

It happens to all of us, when we presented with some opportunity to make money quickly and effortlessly, oftentimes we jump straight in. Just think of how many people play the lottery every day in hopes of winning millions of dollars.

I’m no different. In the past, I started multiple projects with only financial goals in mind. I bought a website on Flippa for 11.5K dollars which turned out to be a flop. I launched a Viral site in hopes to make quick $$ on facebook ads – it failed as well, as I had zero interest in running it. I created plugins for sale only to realize that I didn’t want to maintain those long-term… I’m sure I would be able to find more examples like that if I wanted…

The point is ALL the projects that I started solely out of money interest failed. Some failed right away, some a bit later. In the end I lost money, in some cases a lot of money, but even more importantly – I lost time.

Today my strategy is a bit different. With the help of my awesome coach and mentor Jim Bunch, I identified five core values that rule and define my life. Here they are:

Then I spent some time and gave each of those words my personal meaning. It wasn’t easy, as I had to dig deep to uncover those, but I did it.

Now that I have the foundation in place, I can pinpoint the disconnect between my current life and my core values. I figured that I struggle the most with the last two items – Purpose and Freedom.

Ironically those two are usually tied to my business projects – either I start something without a purpose, but get excited in the beginning or I lose freedom. Having a full-time job just doesn’t mix well with freedom, it’s on the opposite side of the spectrum.

It’s ok to lose freedom in short term, as every project requires the initial push, but there should be some exit strategy in the long run unless you want to be tied to your business forever. Some businesses are incompatible with freedom by definition (surgeon, lawyer). Pretty much any activity, where you trade time for money, limits your freedom.

You can have more than one story for each of those items by the way. Now you need to find someone who you trust and ask him/her to listen to your stories and try to identify some common words that you use. There should be about ten positive words on the list after your session.

The next step is to rank those word, so you know which one is more important for you. Bear with me, I know it sounds a bit weird (maybe even stupid), but just keep an open mind ok?

How in the world do you rank the words? Haha, yeah, there is a little secret that I’m going to share with you as well!

You need to ask the other person to help you insert your words instead of blanks in the sentence and rank your words depending on your answers. The important part here is that you need to say the whole sentence out loud, as you need to tap into your subconscious. Just say it and you will know which word is more important.

It takes a bit of time to play around with diff combinations. Sometimes you may even group the words if they mean the same thing to you. If everything goes well you should come up with the list of words sorted by importance to you.

Take top five and define those – give them a meaning. Write it down.

See, you just uncovered your own core values! The next step is to see if there is a misalignment between your current life and your core values. Pretty cool right?

I’d be curious to know what do you think about the process I just shared and whether if that was helpful for you in any way. Don’t get me wrong, I’m far from perfect myself, but I’m getting there – one step at a time.