A few years ago we purchased a house on Long Island. About half a year before the purchase I read James Altucher post called Why I Am Never Going to Own a Home Again and I thought I would never buy my own place. Why would I need all of the hustle if I can just rent, right?

Anyway, here is happy me in the lawyer’s office signing the paperwork. 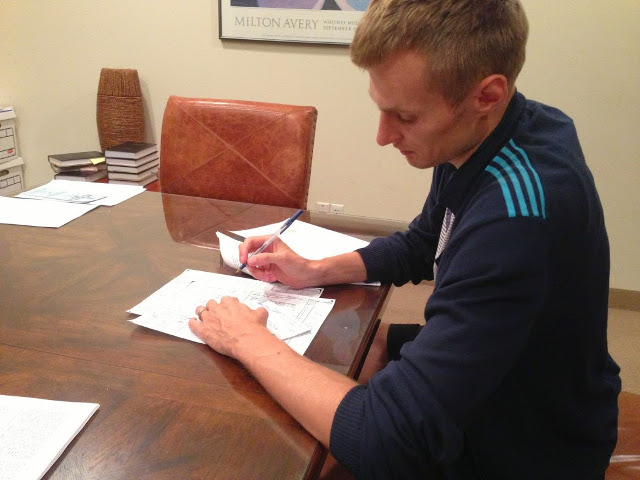 How did it all happen? I have no idea, but it did happen. Well, it was a combination of things for us – the Real Estate market was going through tough times, the interest was low and we had some savings.

We were living in Brooklyn at the time and our first idea was to buy an apartment, we never even considered buying a house at that point. Most of the places that we saw were either very expensive, small or very dated. Actually, all of them were very expensive.

That’s when my brother referred us to his friend and real-estate agent Elvis who was working in the Long Island area. The funny thing that every time we would go to the beach in Long Island (and there are a lot of beautiful beaches over there), we would say things like “Who would ever live here? It’s so far from everything… SO FAR from The City!”

Well, at that point we didn’t have kids, that would help to explain the thinking a little bit. As for the City, I don’t think we went to Manhatten more than once a month for a dinner or something. Even though I worked in Downtown every single day, I wouldn’t say that I was truly in the city, if you know what I mean. Yes, technically I was there, but in reality, I was on 29th floor in the office the whole day and around 6pm I would run underground to catch a train home. Just like in Groundhog day movie…

Anyway, we were a bit (or should I say very) skeptical, but after looking at offerings in Brooklyn we decided to give Long Island a shot.

Elvis, the real estate guy, showed us 3 houses in our price range and somehow we got attracted to the one that needed the most amount of work.

The previous owners were planning to continue their retirement in Florida and wanted to sell the house to someone who would give it a proper care. All the rooms were very dated, the backyard overgrown with weeds and old huge trees… 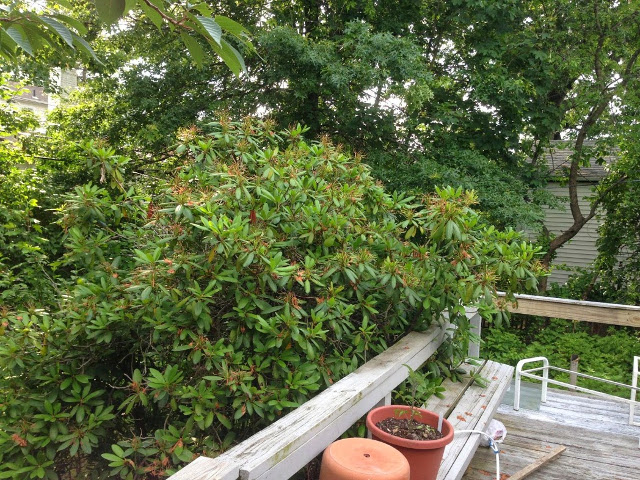 Well, the location and the school district were great. There was a shopping center right on the next street and it wasn’t far from the LIRR train station that goes to either Atlantic Terminal in Brooklyn or Penn Station in the City. Plus there was a small park within short walking distance and the ocean 20 minutes away by car.

Yeah, we definitely considered all of those things, but that wasn’t why we bought it (I think?). Visually the house was a disaster, but there was something about it… We saw ourselves there for some strange reason.

Fast forward four years and I’m writing these words sitting in the basement of the same house. We redid and fixed pretty much everything and spent crazy amount of money in the process. This homeownership journey was completely new to us and we learned a lot of valuable (and very costly) lessons, but at the end of the day, we feel like it was a right decision.

The thing is, sometimes you have to take a step into unknown. The universe shows you the way, it guides you. Listen to your heart and soul and you will see the path…

I actually wanted to write about the power of your mind, so that was kind of long introduction, sorry for that 🙂 Well, I sort of needed it to get to the point. See, I already mentioned that I had a lot of overgrown trees in my backyard, so about a year ago I hired people to cut some old branches.

They did a good job, but there was one big branch that was left out. I myself told them to keep it actually, but then about a week later I realized that I should have cut it as well. If I were to do that, I would have to bring the whole team again, with all of the equipment. All of it just to cut one branch that I didn’t like – big unnecessary and costly project.

I decided to forget about it, but every time I would go to the backyard I would see that branch and think to myself “Man, why didn’t I cut that big branch too??!”. That little “brain programming” continued for the whole summer and guess what, in the end of September I received a letter from my electricity company notifying about upcoming tree trimming work around the power lines!

Tell you what, it was our fourth year at the house and we never heard about tree trimming service before. Anyway, the point is, when that crew showed on my backyard a week later, I asked them to cut that annoying big branch, even though it wasn’t directly interfering with the power lines. Guess what, they did it for free (thank you guys)!

I’m sure some of you may treat it as lucky coincidence, scheduled maintenance or whatever, but I think the whole thing happened because I was consistent with sending my message about the annoying branch to the universe and it decided to make me happy for some reason 🙂

Here is another example from just a few days ago. For years I wanted to go steelhead fishing but couldn’t find someone reliable who would show me the whole process.

Last year my friend and I met a “pro” fisherman and hunter who agreed to take and teach us everything. We were super excited, bought all the necessary equipment including special wader pants and boots and were waiting for his call.

Apparently, it’s not as easy as just going to the spot and start fishing. If you want to catch the fish, you have to constantly monitor water temperature, wind, and some other things.

We were waiting for weeks when I finally decided to text the guy and ask if we ever going to go. He was like “Oh, I went last week, it was good. Caught a lot of fish”. I couldn’t believe it, but hey, what can you do. There was no steelhead fishing last year for us.

I think I mentioned before that I play soccer every week. Turned out one of the guys I play with was also into steelhead fishing and was planning the next trip at the end of October. What a coincidence? He agreed to take us and even give us rods so we could see if we liked that particular fishing style before buying our own.

Here is the interesting part, we made the initial plans to go Wednesday or Thursday this past week, but on Monday’s team meeting I learned about the urgent project at work that had to be finished by Friday… Basically, I had to choose between fishing I planned for years and urgent work project… I was like “Man, I wish we could move this fishing to next week or something” and guess what happened? On Tuesday I got a call from my friend saying the fishing is rescheduled!

Two things to note out of that particular story:

Coincidence? Could be could be, only I don’t believe that.

I’m sure the same thing happened in your life as well. Sometimes we pay attention, sometimes we not. The point to remember is that all the wishes come true eventually, but be careful what you wish for as it works in both directions.

Just try to be aware of the signals you send to the universe every day. Even better, try to establish daily practice (like I do) every morning. Throw in a bit of meditation and breathing exercises. Cut back on carbs, eat more good fats for the brain and trust me, this stuff works!

P.S. Feel free to share your own personal stories where your wishes (good and bad) came true. Come on guys, bring it on!