Long story short, about a year and a half ago I added marketing and personal development books to my often pretty technical reading list ( I did read fiction and normal books too )..

Every day I have almost two hours to read on the train (to/from work) and I love it. I read so many interesting things over the years, but this is not the point. Or maybe it’s?

The point is I want to capture this moment of today for my self, so if someone else is reading this feel free to leave anytime 🙂

A few moments later I hear my son is crying in his bedroom and he usually wakes up pretty early.. but not 5.55 early?? I was hoping to get some time for myself after all.. ok, he fell asleep seems like!

Great great, washed my face, drank a glass of water with the lemon and walking around the house.. what should I do, why did I wake up?? All good questions I know..

Like I said it all about the “Changes” that I want to make in my life going forward.. why change things if everything is pretty good, have some money in the bank, a house, a car, interesting job, loving family.

Some people probably may think I’m crazy wanting changes in my situation.. maybe I am crazy? Who knows..

I just had this feeling inside of me that I want something more out of this life.. something that would give me purpose.. and that’s why I started exploring personal development, marketing.

I’m pretty technical guy, but I’ve always loved entrepreneurship and selling stuff.. weird I know. I actually have an e-commerce business where we sell women clothing (I know right!) and it’s doing pretty good, but that’s the story for another day..

So I started reading different marketing books and blogs and one day my brother came to me excited about webinar he attended and the guy called Russel Brunson and the tool called clickfunnels and how you can easily clone any business in a few minutes and make millions of dollars!

My brother is an awesome guy by the way and I love him a lot. He buys, fix and sells salvage cars on the auctions and I saved more than 15K buying cars from him. He is trying to put together some educational courses to help people save money (a lot sometimes!) so if anyone needs a car – search for Eurotech page on Facebook (Islandpark Long Island NY). He ships cars all over the country, so u don’t need to be in NY. Oh wow, seem like a nice little ad my fingers just created! 😉 but hey, he is my brother and everything is true so it’s cool. Plus I’m not sure if someone is even reading this..

Ok now, where was I? Yeah, so he told me about funnels and I was like “well yeah, but I’m more into local SEO business that Glenn Alsopp teaching (bought his Seo course) and I think that’s better than funnels and stuff, u just rank a website for local businesses where competition is low and rent them your site for a few K a month)”. You know, those kind of business talks brothers have over a bottle of beer.

By the way I tried to rank some keywords, even bought a website called ncmonline.com on Flippa for 11K that I was going to SEO boost it and generate stable passive income. Started building my own PBN network (ha, scary seo term I know), buying and exchanging some links with others. But it was boring the hell out of me.. maybe because I didn’t see results.. maybe I was doing something wrong.. but it was BORING! So yeah, I’ve made some money monthly from the website, but overall I think I’m like 7K down so far. The takeaway? – don’t chase money, you will be bored and give up.

About a month after my brother and I spoke about funnels I decided to buy Russels book called DotComSecrets. Mostly because I was flying to Belarus (10 hr flight) and I needed something to read on the plane.

Let me tell you the book is awesome and I highly recommend it! Learned a lot of valuable info, easy read and packed with value.. almost every word is a golden nugget (especially for technical guy like me who doesn’t know much about marketing and sales)

Fast forward 5 month – my brother and I are flying to Dallas for the Funnel Hackers Live conference for marketers! (Crazy for tech guy I know :)) 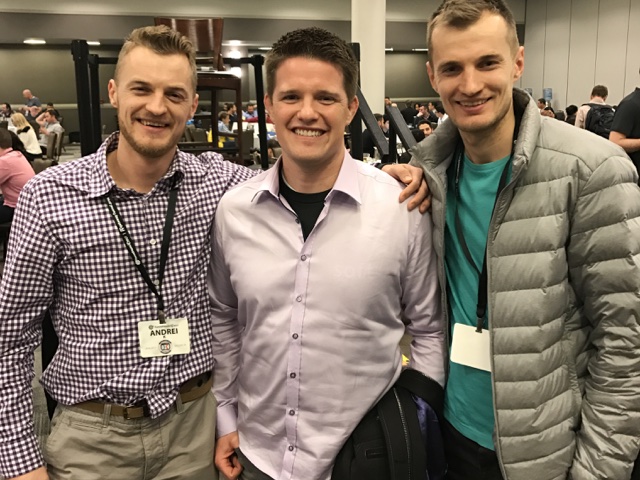 It was great and everything and we saw Russel speaking. I learned a lot of stuff there, but more importantly, I was impressed by people who build things without having tech skills like I did.

You know when u think u are pretty smart and some girl that doesn’t know HTML uses some tools and builders and generating 20k a month.. it’s like a cold shower in a way..

Remember John Connor said in the terminator movie: “Everything you believed in turned out to be complete bullshit” (something like that)

I just started to realize that being technically smart is just a simple little skill in a way..

Then on the last day of the conference, we saw Tony Robbins! He was delivering a short speech for the Russel as a guest speaker. 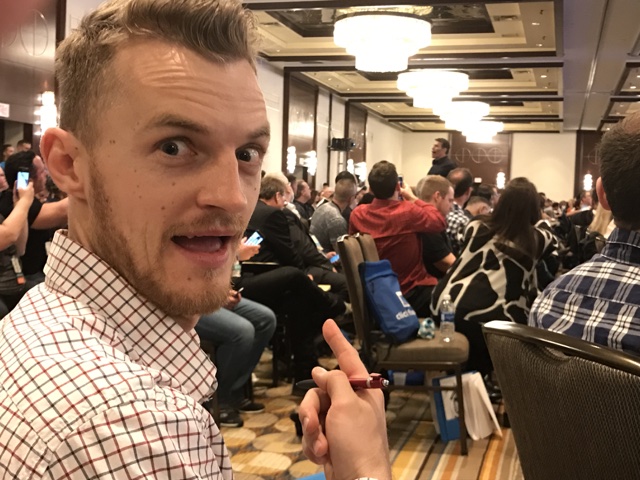 At that point I never explored personal development stuff so it was like a complete new world (another world) to explore.

When he finished speaking he offered us some pretty good prices (a half price basically) on his next Unleash Your Power event in NJ.

The start date was July 20 and that’s my Wife’s birthday, so I saw it as a sign to purchase tickets for her as a birthday present!

Little did I know that it was me who will be going to the UYPW event 6 months later, but I guess that’s another story. 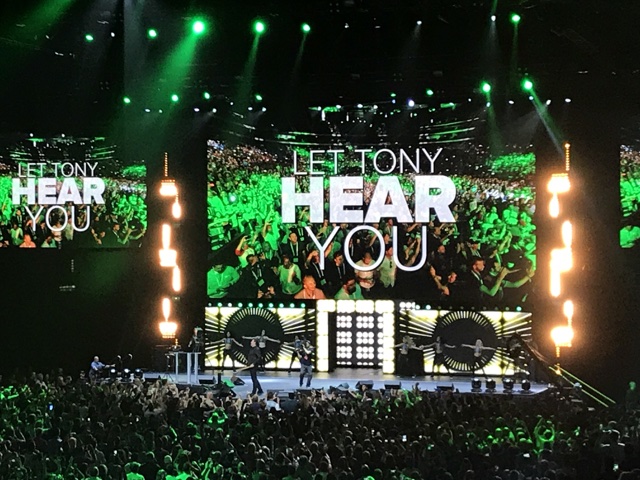 Unless Your Power event was the best I attended so far in my life (all those tech conferences that we attend as geeks are.. well.. how do I put it.. not so great in terms of value and energy that u take out).

Maybe I’ll tell about it later on, maybe some ideas that I found interesting.. could be.

The last day (what is it about last days?) was all about health and food that we eat. One of the presenters was a heart surgeon dr Gundry who transformed into healing through diet. He was presenting his book called Plant Paradox, that I finished the other day and I try to follow his program for 14 days so far and I feel great, def more energy. Will see what happens later on, as it’s usually hard to keep eating healthy when so much unhealthy delicious food is lying around.. ))

The UPYW event basically showed me that personal development, psychology and health are the keys to happiness and that u only achieve happiness when u grow!

I met a bunch of interesting people on the event, people that want something more in life.

Then a week after the event we were invited to the party to our friend’s house where I told stories about my journey (hey I was still full of energy after the event!). I was talking about my new goals, new diet etc and they gave me a book called Miracle morning which I’m reading and trying to follow right now.

The idea so far is pretty simple – you can’t expect changes if you keep doing same things every day! And the only time that we really have for any kind of changes is the morning, early mornings in fact. That way you can start developing yourself and grow before the world and your family happily sleeping.

Well as with most things, if we don’t try to apply things that u learned, you simply forget..

This what I’m doing basically, the goal is to wake up early every day, meditate (didn’t try this one yet), do some physical activity (I love surfing, but depends a lot on the weather), basically come up with the short effective routine that sets me up for productive day, gives me energy boost!

Today’s morning was all about writing my thoughts.. 2 hours of typing on the phone is not fun.. but I had to lay the foundation for what is to come! Omg, it’s close to 2k words already! I think even this write up is the achievement in itself and I would never get around to writing it if I would not wake up at 5.55 today, so see – I already made something I never did before and I’m proud of it!

Now my family is up (as well as my personal time), have to switch to day to day. Until next time! Cheers 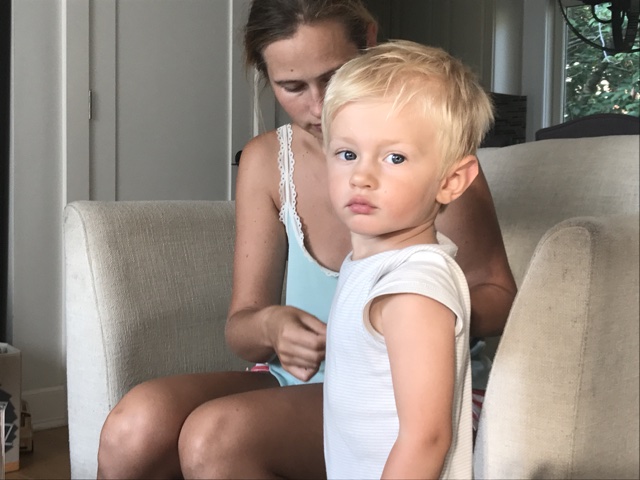