It’s Monday 8.42pm as I write this update. I was supposed to write it in the morning, but then I went surfing and barely even made it to the train to work. Then I was thinking that I would find some time to write at the office, but today was an extremely busy day. I was doing some fun database migrations stuff.

A few hours ago I got back to my empty home (my family returns only in the middle of September), heated some of the leftovers I had from yesterday, watched the episode of the Profit show with the coconut ice cream that I got at Traders Joe’s and finally made it to my computer.

Turns out it’s not an easy task to write updates later in the day, as you just want to relax and generally do nothing.. but oh well, need to train my brain and keep you guys entertained right? 🙂

Any boxing fans out there??? Great. I feel like we need to discuss the event that happened on Saturday, more specifically – the mega fight between McGregor and Mayweather!

As I mentioned in one of my previous posts one of my friends got tickets to the movie theater that was streaming this boxing event live on the big screen! Imagine how great that was. The best part that it was only $40 per ticket! Check this out: 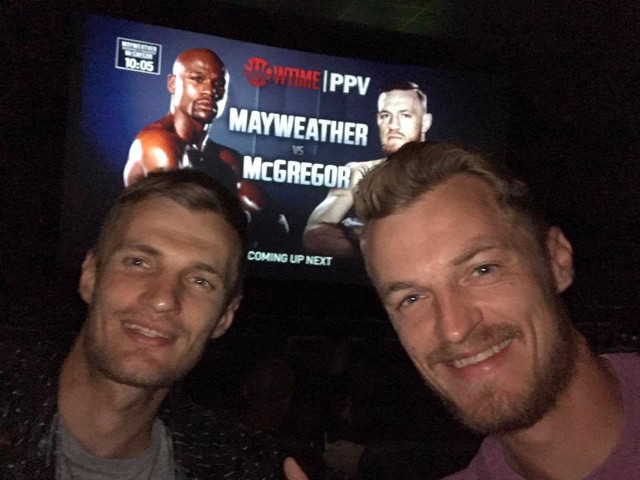 While I truly enjoyed the fight and the whole experience, that’s not something I want to write about.

What caught my attention was a moment in the intro video, where Connor McGregor said that he basically envisioned this very moment a long time ago.

He wanted to make it big in mixed martial arts so badly that he would visualize himself as big super star and truly believes that daily mental practice helped him to turn his dreams into reality. Not to discount hard training of course, but many people train hard or you can say – work hard, but only very few achieve notable results.

As I was listening to his words, my brain started making connections to the same ideas expressed by other successful people like Eric Thomas and Tony Robbins. Even more interesting, the next day after the event I randomly stumbled upon recent podcast with famous music artist Pitbul who literally said this: “At some point, I started envisioned the circles I wanted to be in life.”

It was actually quite surprised to hear him talk so well. Pitbul’s story is very inspiring and touching, so I would encourage you to book 20 minutes of your life and listen to that podcast.

Then there was the book called Think and Grow Rich by Napoleon Hill? It is on the list of top 10 best selling self-help books of all time!

What I found interesting is that the author, a pretty successful guy as you might have guessed, spent a lot of time studying people like Andrew Carnegie, Henry Ford, Thomas Edison, Alexander Bell and a few others.

Eventually, he learned so many details from their lives that he could close his eyes and imagine all of them sitting around the big round conference table, each one of them with their own personality, temper, and voice. Then he himself would come in into the room, sit at the head of the table and hold consult with those imaginary people. He would ask questions and hear what they had to say…

Now, let me ask you a question – do you see the pattern here? A bunch of very successful people in different areas of life basically say the same thing: “Define what you want, visualize it every day, feel it, breathe it and the universe will show you the way”. Take action and be prepared.

Honestly, I don’t know how that works guys. You may even call me crazy for believing in this kind of stuff, but I added visualization to my morning routine. I’m curious if any of you guys tried this before and for how long. Did it produce any results? Let me know in the comments section.