It’s a rainy day today and my mood is a bit cloudy as well. Maybe cloudy is not the right word because I actually like the rain.

When I won my green card and came to the US about 12 years ago, my first job was to sell pictures on the Times Square. I may even have a picture from my early days, when I was still fresh and young )) Here it is: 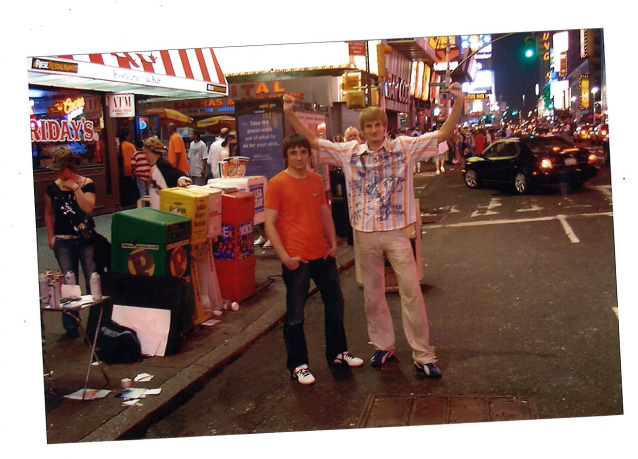 If you ever been in New York before, I bet you’ve seen a few picture peddlers around 42nd street. In fact, I saw one today on my way to from work to Pen Station, so the “business” still alive. The only thing that changed since my time is the price of the picture.

When I started selling 12 years ago, the price of the big picture was $12 ( or two for $20 ) and $6 for the small one (or two for $10). The costs to manufacture the print and the frame were around $1. I think you can do the math yourself, but let me break it down for you in case you can’t. If you sell just one picture, you get 11 bucks cash! Not too shabby, right?

I would normally sell 15-20 pictures in a few hours. Yep, we didn’t work the whole day because we needed tourists to buy our pictures! The ideal time to open up the table was around 9pm when it was already dark outside and all the big boards and screens would lighten up Times Square like a giant Christmas tree.

There was one big problem though. Actually two.

First, if you wanted to open at 9pm you would need to come to the city around 7pm, get your cart, table, and pictures and then hold your spot otherwise someone else would take it. This was kind of annoying, but not the worst.

Cops presented the second and much more significant issue. They didn’t allow us to open up and sell till 11pm at night… Naturally, there were much fewer tourists on the streets at that time and they were already tired from all the fun Times Square had to offer.

We had to open up at 9pm to make money. The stress from constantly trying to locate approaching cops in the crowds was very high… Sometimes they would appear out of nowhere and would give us $100-200 tickets. If you were lucky to get one, that would basically mean a wasted day. All the money that you make (if you make some) would go towards paying the fine.

Almost every other Friday I would go to the court to try to dismiss my ticket in front of the judge. My brother was actually quite good at it. I don’t remember if he ever paid even once. He studied all the Times Square peddler regulations and then would come to the judge with the book of official rules for street vendors and would get his ticket dismissed. I was very impressed by that.

Once I even had to go to the criminal court because one of the cops had a bad day or something and gave me the criminal ticket instead of regular one. I remember going there and waiting for my turn along with some real criminals. The judge couldn’t even understand what I was doing there.

A picture vendor?! I was about to open my mouth to explain the situation, that I was just simply selling my pictures to the tourists, but then I remembered that I barely spoke any English at the time, so I would just stay there with the mouth open, desperately trying to understand what the hell was going on.

Fortunately for me, the judge didn’t bother spending a lot of his precious time looking into my “case” and just ordered me to attend the lecture on proper behavior in New York City, where I happily wasted a few hours. I didn’t go to jail after all and was pretty damn happy about that.

I think I would be still there selling pictures if the competition wouldn’t drive the price of the picture down from $12 to $5. Just today I noticed that the priced dropped even more to a whopping $1 dollar! I have no idea how they make money now.. plus if you add all the stress that comes with the job?

Sometimes I meet a few guys that started around the same time I did but were unable get out in time. Pretty sad… Fortunately for me, I sensed the trend early on. In addition to the price drop, in the winter it was REALLY cold to sell outside.

Yes, even though during the Christmas days I would make $400-500 a night selling pictures around Rockefeller Center ice rink, it was still VERY cold. I would freeze to my bones, my fingers couldn’t count dollars anymore! The crowds were so huge they would move my table with all the pictures along with them. Then cops would show up out of nowhere and give me some more tickets…

I remember the day when I was laying on my inflatable mattress in the 10 by 10 feet room that I rented for $300 a month trying to warm myself up after one of those very cold nights at work and at that moment I said to myself: “Is this how my life in US will look like?? No more selling pictures. I’m done with that! Time to raise my standard and step up”.

I think that was one of the pivotal moments in my life. I’m so glad I was able to make that decision. Trust me it wasn’t as easy as it may sound. Yes, it was VERY cold on some days. Yes, there were cops that giving us hard time. But it was also quite fun at times and I loved selling and practice my English skills at the same time (and making money of course).

Plus I loved hanging out with my brother, seeing him smiling while taking money from the tourists and wrapping sold pictures into the white plastic bags. He was so good at selling and I learned a lot from him! Almost every day he would sell twice as many pictures as I did!

Fortunately, he also made the right call at the right time and switched to selling cars. Give him a call if you need one, you will not regret, I’ll promise.

Honestly, I wanted to write this post about completely different topic, but the rain decided to take to the past… What can you do… Yes, I do like the rain, do you really want to know why?

It’s actually quite simple. It wasn’t possible to sell pictures outside during the rain, the prints and frames would get wet and bubbly, so we would just skip work and stay home. The rain essentially meant a day off for us back then.