Up 5.32am and went to sleep around 10.50pm. Definitely did not wake up by myself yet. Woke up multiple times this night due to the stuffy nose, possibly due to my surfing sessions yesterday. I did the second one after work and there were much fewer people and waves were not as good as in the morning, but I enjoyed the quietness and peacefulness of the ocean, The only thing I didn’t enjoy is the amount of seaweed. I was completely covered in it from the top to bottom and probably ate a lot of it as well.

Just heard the movement in my sons room, so I need to hurry up with my morning routine, especially since I skipped it yesterday in favor of surfing. See ya later!

6.56am – all done, got my cold shower and ready to rock and roll. My son is already up by the way, he started waking up early even before I did 🙂

Finally found some music that I like for my visualizations!

Today I wanted to talk with you guys about Supplements. Have you ever heard of someone who was taking supplements and you felt like you had zero knowledge about that topic? Well, I did for sure.

Guess what? Yesterday when I came from work I found a package waiting for me. In that package, I got the supplements from Dr. Gundry (the guy who wrote Plant Paradox book I mentioned in my previous episodes).

I already hear screams in the crowds “Why Sergey, Why Why Why, Why in the world you need supplements, you are healthy guy, just eat normal food and everything will be alright!”

As you probably figured I don’t want to be alright, I want to be FUCKING AWESOME! 🙂 I’ve be alright for 33 years old and I’m done with that.

On a more serious note this is the message from U.S. Senate issued in 1936:

“The alarming fact is that foods-fruits, vegetables and grains – now being raised on millions of acres of land that no longer contains enough of certain needed nutrients, are starving us – no matter how much we eat of them”.

That was back then when agriculture and pesticides were much less advanced and infrequently used than today. This information is also consistent with another book that I currently read called “Toxin solution” by Joseph Pizzorno. It’s kind of scary book, to be honest, but it’s better to read it and face the dangers than ignore and think that government will take care of you…

If a lot of soil is depleted of valuable minerals and nutrients (at least here in US), then we need to supply them from other sources (hint: supplements). That’s my thinking at least.

Do not forget that I’m not a supplement guru and there is so many different products on the market, that it will take a lot of time for me or anyone else to learn all the details and nuances.

My logic here is simple at the moment – I read the book and trust the guy who wrote it (Dr. Gundry in case), so I ordered some of the supplements he designed. There are different alternatives that you can use that are also described in the book, but the thing with those is that you will have to order like 20 different substances and then mix appropriate proportions by yourself.

While cheaper, mixing supplements by myself it’s not something that I’m looking for. At least not at this point when I know so little. Actually, because of high prices of Gundry supplements, I was seriously considering mixing by myself and almost purchased a bunch of different ingredients on Amazon.

Then I discovered there is a VIP club on his website where you can register and get those same supplements at much better prices, which I did. Remember, you always trade something for something, in my case I’m trading my time and peace of mind for money.

There is one last thing that I want to address here – when I spoke with my parents (they still live in Belarus and I talk to them on Skype every week) by the way and mentioned that I’m trying new things and stuff, they were pretty skeptical and kept repeating “That’s how those so called doctors make money!”.

I get that. I get that they are making money and I applaud them for that. As long as the product works and deliver benefits that it promises, then I’m totally ok with that. Just try to remember last time when you got something really really good or free. Free in this case means not just money, but moral obligations as well. You know when someone does something for you for free or gives you something and then you feel the need to repay them back in some way. I don’t call those free. There is always cost.

Now that’s behind us I want to focus a bit on the supplements that I tried this morning. Basically, my supplements at the moment consist of Vital Reds (Polyphenols), Primal Plants (Phytochemicals like spinach extract + other stuff like DIM), PreboThrive (to keep my gut buddies happy) and vitamin D3. 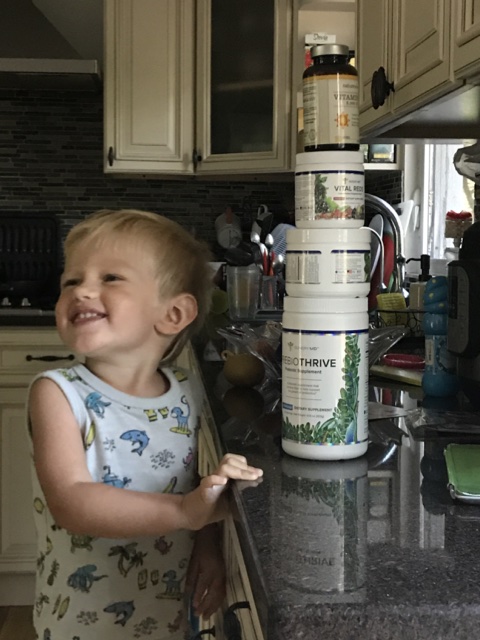 Interesting story about vitamin D3 – last year when I returned from the trip to Belarus, I felt very sick, coughing and stuff so I decided to go to the general doctor nearby so he could check my lungs and stuff. He suggested some blood tests which I did. The results said that my D3 level was very low even though I was outside surfing and enjoying the beach a lot. That surprised me back then. Dr. Gundry said in his book that about 80% of his patients are vitamin D3 deficient. That’s why I added it to my supplementation as well.

I mixed all of the powders together in the glass of water and the taste was surprisingly good. I expected much worse. You can also add those to smoothies and other drinks. I’ll try that later.

Since I just started today, it’s too early to report on the specific results, but my stomach feels good so far and I didn’t eat my breakfast since 6am.

Now I have a beautiful plate in front of me prepared by my lovely wife, so I have to wrap up the writing and enjoy my breakfast!