Good morning everyone! Observing sunrise as I type my update and looks like it’s going to be another awesome day! Today I woke up almost by myself (5.30am of course), which was a bit surprising.

Have you ever heard of Icemen or Wim Hoff? No?! Not surprised. He holds a bunch of world records, for example, one of those is the 6.7 kilometers (22,000 ft) climb at Mount Everest wearing nothing but shorts and shoes. Basically, the guy is nuts! Or is he really? 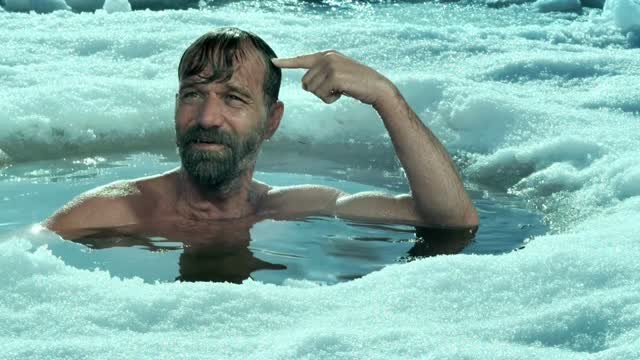 I saw him live on UPW stage about a month ago and he was great. I’m not sure how old he is (fifty, sixty?), but once he showed up on stage he immediately did a split )) You could literally feel the positive energy that was coming out of that guy.

Basically, Wim developed special breathing technique that provides short bursts of oxygen to your cells (and boosts your mitochondria of course). Still remember his words “Just fucking breath man”. Apparently he through this technique he trained himself to fight off different diseases. Not so long ago, he participated in the experiment where he was injected with different viruses, sick stuff you know, but what’s more interesting is that he was able to kill them off within 15 minutes of injection. All through breathing techniques.

At the UPW event, we did some group breathing exercises. It was kind of funny and strange to observe 14K people inhale and exhale at the same time. I took a mental picture of this guy in my head and moved on with my life.

A few days ago I stumbled upon a chapter in the Head strong book about the importance of limiting oxygen in your body via special breathing exercises. I immediately remembered the Icemen (Wim Hof) and decided to do some more research on the topic.

Apparently, there are a bunch of studies that show the positive effects of the temporary oxygen shortages. It basically boosts you mitochondrias and forces the body to do the garbage collection of poorly functioning or dead cells.

Not sure if I explained the technical terminology correctly, that’s not the point. The thing you need to remember is that you can train your body to use oxygen much more efficiently and that will boost your overall health and energy levels.

Here is the short video that shows a very simple breathing exercise that I actually tried today during my morning routine. It’s recommended that you do that right after you wake up, while your stomach is still empty.

You probably heard that professional athletes prefer to train in high altitudes, especially before major events like Olympic games. It makes their bodies more efficient as they have to constantly deal with low oxygen levels. When they go back to the sea level for the competition they get the temporary performance boost. All of a sudden there is much more oxygen to consume and the body switches into turbo mode. Eventually, as the body adapts to the new environment all special effects disappear.

To give you a perspective, something that I didn’t even know myself, there is a special equipment that is designed for the intermittent hypoxic training under load. One example of it is the exercise bike connected to the bag of oxygen. It automatically regulates oxygen levels as you pedaling away. Pretty cool right? )

There is just so many fascinating stuff out there! Just yesterday I saw something related on NBC. Basically, a former pro surfer designed a facility with a giant pool where people use weights to move underwater. Another good example of low oxygen environment where you need to periodically hold your breath as you go under water and exercise.

They also used a sauna where you would get really hot and then go to the tub filled with ice cubes. The TV host who interviewed the owner decided to try it himself. He was in a pretty good shape, but could only last for 20 seconds or so in the ice tub. The pro surfers 9-year-old daughter could sit there for 9 minutes… Amazing stuff.

Fortunately, we don’t have to go 15,000 feet up or use advanced equipment to get get the benefits of the low oxygen environment. A pretty good start is to follow this simple breathing technique that I posted above. Start simple, don’t go crazy.

Here is another video with the Wim Hof (the Iceman) and Joe Rogan that you may find interesting:

Did I personally felt anything special after doing the exercise? For one, it allowed me to shake off my sleepiness and yes, I did feel good afterward, like a small energy boost. Remember, I tried it today for the first time, so I didn’t set any expectations, but I’ll incorporate it into my daily routine going forward.

One of my friends recently purchased one of the Iceman’s breathing courses, I’m sure he will share some useful tips and takeaways. Feel free to subscribe to my mail list if you want to receive my special tips and hacks designed to boost health, happiness and productivity levels.