There were rumors around the town that the big swell was coming.

Since most of the population here at Nosara Costa Rica swirl around surfing in some way or another, everyone was super excited.

MagicSeaweed, the site I usually use to check surf reports and forecasts, confirmed the same thing: 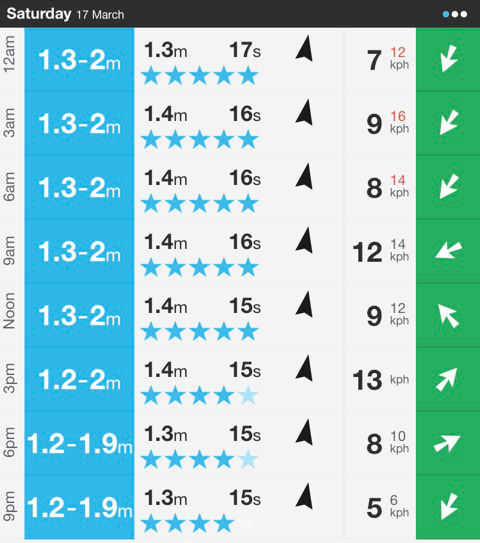 To give you a bit of the perspective, we rarely get even one star here at Long Beach NY where I normally surf.

I wasn’t super excited though, as I knew from the past experience that those big waves would come with responsibility and the next morning confirmed just that…

When I parked my car not far from the beach and stepped outside, I was welcomed by the massive uproar caused by the breaking waves.

At that very moment, I knew it would not be an easy session, but went ahead anyway…

It was so hard to reach the lineup (relatively safe place behind the breaking waves where you can finally take a breather and prepare to take off).

As I was paddling hard, duck diving with my board and eating some white water, I noticed another surfer who apparently lost his surfboard (the leash connection his leg and the board just snapped off under pressure) and waves were crushing on top of his head.

Judging by the look on his face, he was pretty exhausted and about to give up, so I had to turn around and help him get back to the shore. Wasn’t easy with all of the breaking waves and two tired guys on one board, but we made it.

My second attempt to reach the lineup was twice harder, as I was pretty tired already. Every time I would lift my head from yet another duck dive I would see a giant wall of breaking water upfront.

More than once I was about to give up and turn around, but somehow I found the mental and physical strength to get past that breaking madness.

Interestingly enough, as I was totally exhausted trying to catch my breath and avoid incoming waves, few other surfers (mostly local guys) were riding them with unbelievable ease and having a lot of fun in the process.

As you probably already guessed the biggest difference between me and the local surfers was in my physical and mental condition.

See, I was coming out of the long winter break and on top of that have been surfing twice a day for the past week.

Needless to say, my hands felt like two giant spaghettis even before I reached the water.

Once I finally reached the lineup, I couldn’t really relax as the waves were breaking pretty often and at different spots and I would have to constantly paddle in different directions to avoid getting wiped out…

What supposed to be the big wave chasing turned into a battle for survival.

In the end, I was so tired that I just couldn’t keep up anymore and when another giant wave started approaching on the horizon, I just sat on my board and watched it become bigger and bigger in front of my eyes, waiting for inevitable…

When that monster-wave pretty much broke on top of my head, I was barely able to take a deep breath and let go.

I felt a deep sense of relief when I finally felt sand under my feet. The big waves surfing was over and I was still alive, yay! 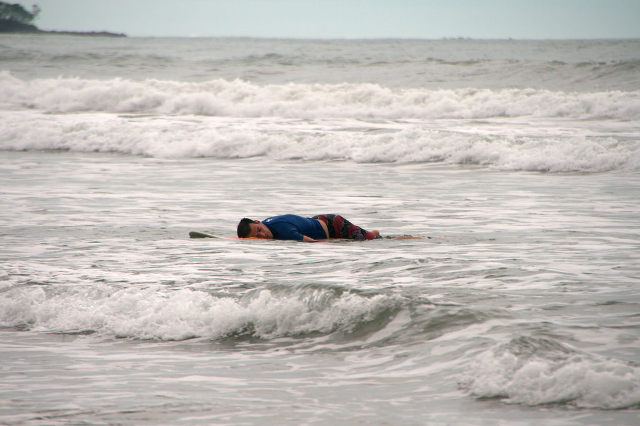 On the way home, I couldn’t stop thinking about parallels between my surfing experience and our daily lives.

We want everything and pretty much immediately.

We want our writing to hit a homepage of hacker news on the first try.

We want to get a ton of orders for the e-commerce store that we launched a week ago.

We want to lose/gain 30 pounds the first time we hit the gym.

We want to be super funny and memorable on camera when we shoot our first youtube videos hoping it would immediately go viral. Just because it should, right?

We want to magically win millions of dollars hoping it would solve all our problems.

When we don’t get what we want, we stress out and give up or switch to the next quick thing.

In reality, everybody sucks at the beginning, that’s the sad truth. But as we keep doing something we become better.

Just imagine for a second what would happen if you would get in front of millions of people this very second, I bet you wouldn’t find what to say or how to convert this traffic into something useful.

What if you were given a hundred, ok ten, people to lead when you can barely lead yourself.

Just like in the casino, the higher the stakes, the harder is the potential “wipeout”.

The key, in my mind, is to slowly (but surely) grow physically and mentally in order to tackle bigger challenges, especially if you start something completely new.

That’s how you keep sanity and actually have fun instead of exhausting yourself constantly paddling around with the big boys trying to survive.

Take a deep breath and don’t be too hard on yourself. You have time. Just pick something that you like and do a bit of it every day. When you add up all of those days later on you will be amazed by the results.