Last week we were celebrating the migration from the legacy platform. Yay!

Big project with a lot of people and effort involved – definitely a great occasion to have some drinks and socialize. 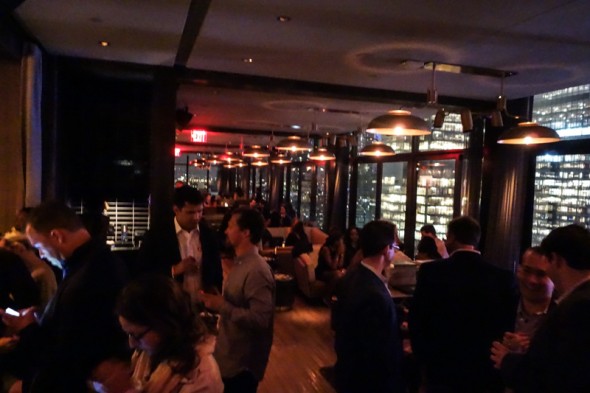 It was interesting to observe how our big “digital services” crowd quickly broke down into smaller units.

The marketing and sales folks stayed close to the bar while the “geeks” gathered in the distant corner, some even pulled out laptops, desperately trying to disconnect from the unfamiliar social environment.

Pretty common scenario and I’ve seen it many times before. Too many times…

To tell you the truth, not so long ago, my own reaction to any social event like that would be to either skip it completely or hide somewhere in the back so I wouldn’t have to talk to anyone.

I was scared and uncomfortable and didn’t really know how to maintain a simple “small talk” with other non-geeky people.

A few years ago I’ve made a conscious decision to improve my social skills and started forcing myself into situations that would make me uncomfortable.

Guess what, I became better. Much better.

Here is the most important part, the more I ventured outside of my comfort zone, the more opportunities showed up on the horizon.

The point is, there is no growth in the comfort zone.

I worked at FastCompany for about 8 years and at the end, I felt stuck and unhappy. At the time I couldn’t really figure out what changed – the people I worked with were awesome, I pretty much had my own schedule and yet I was becoming more and more depressed…

Only about a year after I left the comfortable and familiar environment I was able to understand my problem.

It boiled down to the lack of growth. I needed to shake things up (which I did by the way) in order to strike the peace with myself and feel alive again.

Here is another example.

Yesterday I was getting back home from the soccer practice and got stuck in a very bad traffic. Two out of three lanes were closed because of construction work (you know, that kind work where there are a bunch of orange signs everywhere and no actual work happening) so I got home about an hour later than usual.

Naturally, I was pretty upset and wished I had a car that would simply follow the one in the front and maintain the distance automatically, so I could relax and read a book or take a nap instead of wasting my energy on useless start/stop activity (we will get there pretty soon I think).

The only thing that helped me to maintain the sanity and kill the time was the new podcast episode by Jocko Willink. He is the retired navy seals commander turned into the bestselling author, podcaster and entrepreneur.

I got to know him through the book “Extreme Ownership: How U.S. Navy SEALs Lead and Win”, one of the best books that I read in a while.

Anyway, the podcast episode that I was listening to was a simple QA where Jocko would answer random people’s questions.

There were two questions in particular that stood out to me.

First was asked by the restaurant chef. Basically, the guy just received the evaluation by two of his bosses and the feedback was mostly very positive, with only one small detail – they both wanted him to become more social and asked to come out from the kitchen once in a while and talk to clients, at least the high profile ones.

The chef wasn’t happy about the comments and asked Jocko’s opinion on whether he needed to change and conform to what his bosses wanted or “stay true to himself aka Kitchen Dog” and focus solely on the kitchen operation, something he was extremely good at.

Jocko’s answer was simple – if he wanted to stay where he was (in the back of the kitchen) then he didn’t need to do anything, but if he wanted to become something more, a real chef his bosses wanted to see, it’s likely that he needed to step out of comfort zone and grow into that new role.

There was another probability as well, if he would simply refuse to change then he shouldn’t be surprised when one day a new guy would show up and take over the position as a head chef…

Way too often we get attached to our fixed ways of doing things. Execution is important, no doubt about that, but it’s as important (if not more) to learn how to present ourselves and our ideas to other people. There is no point in execution if there is no project of it wasn’t approved by the higher-ups.

The second question was asked by the guy who wanted to know the best way to prepare for the street fight or other unpredictable violent situation.

Guess what Jocko’s recommendation was?

Nothing will prepare you for the street fight better than a street fight itself. The second closest option to that would be to go to a gym and find a sparring partner and learn how it feels to be punched in the face!

First few punches would likely shake you to the core, you may even get paralyzed by the pain and fear for a few moments, but eventually, you will get better and more prepared than you used to be before.

If you give in to the pain and discomfort and simply quit after the first few punches (like most people do), then you will retreat back to your familiar shell and will be hunted by regrets and what ifs till the rest of your days.

It’s ok to quit and switch the direction, but it’s important to take some time and see if the current approach works or it doesn’t. Sometimes (most of the times) it takes a bit of patience.

Get some courage, take a step into unknown and face your fears. Don’t waste years of your life (like I did) waiting for the situation to improve on its own.

Unless you make a change.