Pretty much my entire life I struggled with following the rules and “policies”. Still do. I ignore, bend or change them whenever possible and try even harder when it seems like it’s not. Because of that I oftentimes appear as the arrogant asshole in other people eyes.

To give you a specific example – just the other day I was arguing with my senior colleague about the decision to wake up engineer at night in case of one node down in a six-node Cassandra cluster. He was trying to make a point that even when only one node was down, we still had to trigger a VictoOps phone call at 3am and make sure on-call person acknowledges it by pressing number 4 and then goes back to sleep.

My point was (after being that on-call person for multiple occasions) that the alert in the existing state was useless and had to be changed to notify by phone only in case of at least 2 nodes were down.

Turned out it was a “company policy” to wake up people every time a node was down in production, no matter what. That was “the law” and it couldn’t be changed!

When I hear words like that something triggers in my brain that makes me want to prove that everything could and should be changed if it makes sense.

That’s just how I operate and it’s been like that for me since I was a little kid.

About a year ago I discovered that my personality type was called the Debater and almost every single word describing it was a 100% match with my internal representation.

Highly encourage everyone to take this test called “16 personalities” in order to understand yourself a bit better (never hurts).

It helped me confirm that I’m at my best when generating ideas and solutions but not as good at implementing them. That’s why over the years I had to learn to rely on others to make sure my plans become the reality (hello management?).

There is another great tool that I discovered while attending Tony Robbins UPW event – it’s called DISC Profile. This test is so important that a lot of top-tier companies use it for screening all potential hires, especially salespeople where they won’t even consider a candidate with a low natural D.

I won’t go into too many details here.

Instead, I’ll show you my DISC results and compare them to my friend’s who is one of the smartest software engineers I ever met so you can see and understand what I’m talking about. 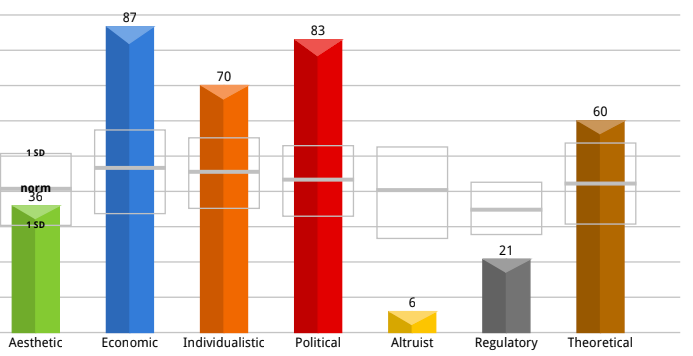 At the same time, my natural C (execution, details oriented) is low, but adapted is high, meaning I’m naturally bad at execution (which I already mentioned above), but because of my job I had to adapt and force myself to deliver results and be more focused.

Usually, when there is a disbalance over 20 points between natural and adaptive styles (color vs gray bars) it indicates some sort of stress. It usually manifests as a feeling of not being in your place or doing something you shouldn’t be doing.

In my case, there is an imbalance for S and C that suggests I should focus more on “people-oriented” side of my craft (building teams and be more social, start sharing / teaching / coaching). At the same time, I should execute less and instead work on bringing in people who are naturally great at getting shit done (and believe me, these people do exist! See my friend’s results below) and get out of their way.

There is also a slight mismatch in the D sections which I can interpret as “less overthinking / more doing”.

Ok, now let’s take a look at the Values graph (the second one). As you can see I have very high Economic (the need to know the potential outcome before starting anything; most entrepreneurial types have it the same way usually), Political (leadership, strives on being in charge), Individualistic (value freedom to do things my own way) and Theoretical (love to learn) values.

At the same time, my Regulatory and Altruist values are very low, which means I’m extremely practical (selfish? omg..) and hate rules, policies and regulations. 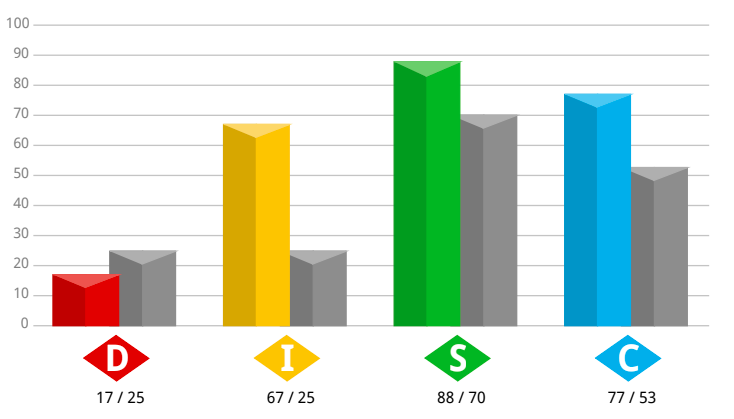 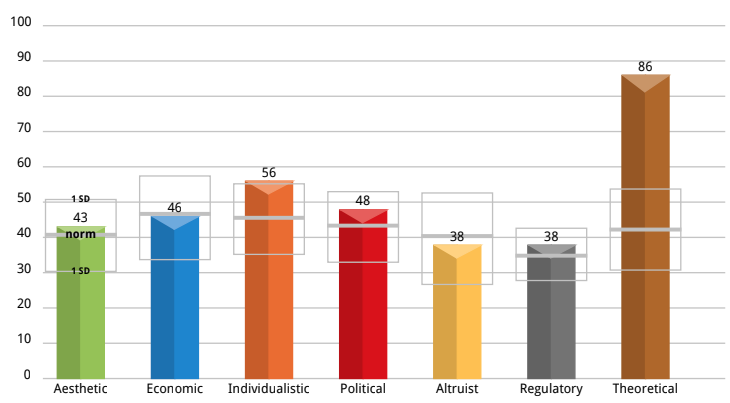 See the difference? What we have here is a perfect team player (very high S) who is VERY smart (very high Theoretical) and gets shit done (very high natural C) without pulling the leadership blanket and aggressively competing for the status quo (low natural D as well as average Political and Economical values).

—-> An instant hire and a keeper in any team/organization.

I’d like to point out one thing though. If you look at my friend’s graphs you will see a mismatch between adaptive (gray) and natural (color) styles when it comes to D I and C. That could tell us that he tries to be more hands off and possibly move into management role even though it might be not an ideal situation for him.

Instead, he would be better off executing (writing code / builidng / creating) as well as share the knowledge (contributing to other people growth) possibly as a team lead and his main growth trajectory should be finding great entrepreneurial partners and the right team that would enable him to do what he loves and make a lot of money in the process.

I think we would make a great team together and to tell you the truth we are already looking for a way to make it happen. The problem is the guy is worth a ton of money which I can’t currently provide, but I have a few ideas, will see what happens 🙂

Anyway, I hope you got the main idea – you need to really figure yourself out and see if management (leading) is something that you really strive for. We are all different and we are all great. The trick is to get as close as possible to your natural self in order to feel happy and fulfilled. No amount of money will help you reach that (not in the long run anyways).

With that said I encourage all of you to take free “16 personalities test and DISC Profile test. See how you feel about the results – are they close to your internal representation of yourself or maybe they are totally off?

Feel free to let me know in the comments as I’m really curious.

For all of you high Cs out there – I’m sure we can do a lot of amazing things together and I want to hear from you! 🙂

Feel free to ping me if you want some specifics on your particular results. While I’m def not a pro I’ll try my best to provide you with my perspective.

It’s actually quite a bit of a science and there are fulltime professionals like Mandy Keene who specialize in interpreting DISC test results (as well as some others) and helping people reach their natural potential.

It probably makes sense to wrap up here, but I promised you a story about my personal transition into “management”.

To tell you the truth I’m currently living in two universes at the same time (the very fact that likely hinders my growth trajectory). I have a fulltime job as SRE engineer at HBO and at the same time, I’m involved in two side projects where I run two small remote engineering teams.

Not going to lie its kind of hard and weird to constantly switch between the executioner and a leader, but it def could be done, especially if the side project is an early startup without a stable revenue stream.

Side note 1: If your side project is in the startup mode for 5 or 10 years, then maybe it’s time to “take it behind the barn and shoot it”. It will be hard to do but it will give you more time to focus on something more important and/or financially rewarding.

Side note 2: If you run too many side projects (like I did in the past), then you are spreading yourself too thin and reducing / eliminating your chances for the successful outcome with any of them. Prioritize what’s important and drop other distractions (or keep them your ideas list). Where Focus Goes, Energy Flows.

Now to my actual transition.

When I started e-commerce store project I was the only developer for many years. It was great in the beginning as I was happily coding and learning new stuff. I was living in my own little world where everything played by my rules.

As the business kept growing, I was bombarded with more and more feature requests which I just couldn’t deliver quickly.

Eventually, I started avoiding my business partners because I didn’t want them to give me even more “interesting ideas”. They needed more product categories, fresh and modern design, a mobile app!, simple registration process with the option to log in with the social profiles, improved admin area to reduce order fulfillment errors and the API layer so we can share products with other vendors.

I hated them for that.

All great ideas by the way. What’s more interesting is that I had the biggest equity stake in the business and would benefit directly from adding all of that goodness into our webapp.

Yet I was growing more and more depressed and irritated as I was naively thinking that I could continue slowing everything down and do things my “proper” way without any rushing and screaming.

Thankfully one day it hit me. I finally realized that I became the bottleneck that sabotaged business growth and I needed help.

Remember, acceptance is the first step to the cure.

I had to become a leader in order to take this business to the next level. I had to step up.

Within a few weeks after my awakening, I found Andrey from Ukraine. He didn’t want to join my “team” initially because he thought I was an obsessed crazy maniac with a bunch of unrealistic expectations, but somehow I persuaded him to give me a chance.

Not going to lie – it was very tough. Even though the guy was very smart, I had to learn how to let go off the reins and let him actually help me.

We would argue for hours about specific implementation details or coding standards or some other stuff.

Mostly because I would try to prove that I was “the know-it-all”/”the man” when in reality I was just being a dick.

Guess what, everything improves with practice and so did I.

In the end, Andrey played a critical role in our company growth and stayed with us for 5 long years. (thank you!)

Over the years that followed I learned how to spot, hire and keep great engineers around. It’s one of my greatest superpowers today that makes me extremely valuable as a tech partner in any venture.

Today I’m almost entirely hands-off when it comes to the e-commerce business. If something breaks in production it’s unlikely that I’ll fix it myself any longer. A lot of things had changed since I was actively involved. A scary thought, right? Took me a while to get over the fear and let others take on the responsibility.

But it is so worth it. At least for my personality type.

That’s about it for now.

Hope my story gives you some confidence and inspiration to get your first hire going.

2 thoughts on “Should I move up the ladder or stay low and technical? – part 2”