Everyone was super excited about crypto, including me of course. By that time I put over 20K in different coins and everything was exploding – 100% in a few days was not the gain any more, a mere distraction.

Bitcoin just hit 19K. Crypto gurus predicted it would hit 100K by the end of the year (in 3 weeks basically).

Some of my friends who had nothing to do with technology at all became crypto experts and traders seemingly overnight.

Hell, I even wrote some crypto articles myself: Cryptocurrency 101. Is NOW still a good time to get in? and How you can actually get your first crypto coins.

Still clearly remember myself doing my morning Chi-Machine session and seriously considering investing every saved dollar that I had in crypto, including the money from the home equity line of credit that I opened not so long before.

Well, maybe I should have.

Not sure if I told this before, but the main reason I got involved in the crypto space was because of Mark Moss, who I met at the two-day business event in Boise, Idaho.

We had a chance to talk to each other during one of the lunch breaks and Mark was like: “So you are in IT space right?”

I mumbled something along the lines of: “Yeah… I help businesses to optimize their websites, increase speed…” (clearly didn’t have any specific idea of which direction to take with my future business venture).

Mark: “Man, that’s kind of boring and too technical… Plus I do receive a bunch of offers like that for my own websites already. I think you need to reposition your thing. Maybe focus on showing website owners how they can make more money after working with you instead of focusing on tech details?”

He went on and on generating more ideas for my “business”, making it more market-friendly and I was staying there thinking to myself: “I want to be like this guy – smart and sharp!”.

Then I asked what he was up to and that’s where I learned about crypto. Mark told me that he started playing around with the stock market about 15 years ago, did a bit of day trading, made some decent money then lost it all, switched to real estate and was doing great for a while until that market collapsed in 2008.

That’s when he started putting money in cryptocurrency market and getting unbelievable gains (Ethereum was around 5$ when he first added it to the portfolio).

Next, Mark started sharing the info with his friends and family and their crypto portfolio skyrocketed as well.

It was time to take the information to the broader audience and that’s why he attended the business training where I met him, to learn the best strategies of how to package and sell his knowledge.

I came back home after the Boise event and started paying attention to the crypto news that I previously brushed off as “shady thing / fad” (in reality I just felt comfortable hiding under a rock and had zero knowledge in the area).

At the end of October, I bought around 5K worth of Ethereum, my first official investment in the cryptocurrency space!

Around the same time, Bitcoin started to rally up. I wanted to buy one piece at 4K but as I was waiting for coinbase transfer to complete the price went up to 7K in a short few days, then it hit 15K… I decided to postpone my purchase.

The internet was going crazy and I started feeling the first signs of FOMO (fear of missing out). There were a bunch of interesting altcoins on the market and I didn’t know which ones to get… and I desperately wanted to catch the leaving crypto train!

My brother Andrei was also anxious to get in, he texted me every other day saying things like: “Did you see the bitcoin price? We need to get some as well before it’s too late!”

I realized that we needed some help and quickly, that’s when I remembered Mark’s course. I got on Facebook messenger and in about 20 minutes got access to his Crypto program and portfolio (minus 1.5K out of my pocket of course, as nothing good in this life is free, if you didn’t realize this already).

In a matter of few days, a opened a bunch of positions (bought different coins and tokens) and finally relaxed a bit. The whole process wasn’t very straightforward and I had to figure out a lot of little but important details, things like how to buy alt coins, how to send them to different exchanges and swap for coins that I needed, where to store them securely after the purchase… My head was exploding with the amount of new information, but I got through somehow.

Now that I had my portfolio going I could finally switch back to my regular day-to-day activity (fiddling with servers, helping the new startup to take off and growing my e-comm store).

About a month later (end of December 2017), Mark posted a message in our private Facebook group saying that his crypto product brought in a million dollars in 28 days after initial launch. 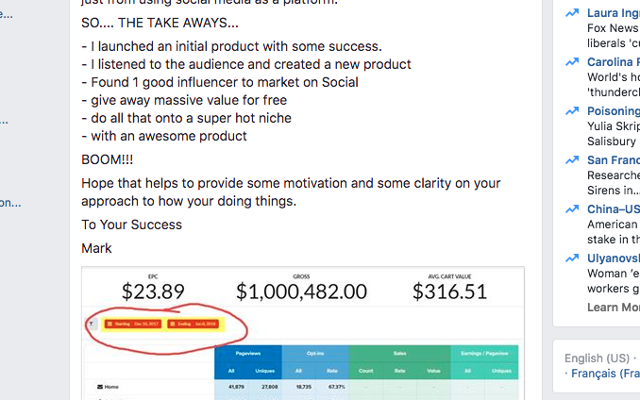 Stop here and re-read again – million dollars in less than a month!

He basically attributed the whole thing to the three simple steps:

I couldn’t focus on anything else for the next few days, trying to think through different options of my potential involvement (FOMO spiraled out of control yet again).

At the time, the crypto market was still going crazy, which explained a huge sales numbers behind Mark’s product, but I wanted to know “the secret” from the first hands.

It was hard to book a timeslot in Marks schedule as he was extremely busy trying to support all of the new customers that came in seemingly overnight, but at the beginning of January, we finally jumped on the Skype call to explore some potential partnership.

In the nutshell, I had this idea in my head that I could take “whatever Mark created” and offer it to the Russian-speaking market, which initially made a lot of sense to me as I was answering a lot of crypto-related questions from the old friends and family members.

I thought I could become a unique New York based crypto influencer for the Russian speaking audience and I would do it by recording Youtube videos and posting other related content.

Hell, I even bought two domains for the new venture: BLOCKCHAINSECRETS.RU and CRYPTOSECRETS.RU (let me know if someone wants to get those by the way!)

Mark liked the idea and offered me an exclusive partnership in that region plus a hefty commission from everything that I would sell. I just had to take their public materials they already posted on Youtube and Facebook group and translate those to Russian. Easy peasy!

One important detail though, it turned out that the thing that made a million dollars in 28 days wasn’t the info product that I bought from Mark a few months before, but a new crypto trading platform that would send out buy/sell signals for the different coins and you as a customer just had to follow through and execute the transactions on the exchange.

Mark explained that people didn’t want to hold those coins for a long time and demanded some action for the new “hot” coins that were coming out left and right. He listened, partnered up with another successful crypto trader and solved peoples “urge/problem” by offering them the signals platform (even though a simple buy and hold strategy would be much more efficient in the long run).

It didn’t matter for me at the time, as I just wanted to sell whatever worked and make a lot of $$$ in the process.

We finished the call on the high note. The partnership that I wanted so badly became a reality. I was super excited about my future as a crypto guru with millions of dollars rolling in into my bank account.

As the day went on, I kept thinking about the conversation with Mark and sadly realized (and rather quickly to my own surprise) that I had to let it go…

To start, I wasn’t a fan of the “trading” concept as the vehicle for long-term wealth generation and I just couldn’t imagine selling something I personally didn’t believe in.

Second – I didn’t have any relevant audience or connections in the crypto space. On top of that I wasn’t any “influencer” and didn’t even produce any high-quality youtube videos before (I could do it of course, but it would take me significant time (years?) to get good)

Third – the crypto space wasn’t really interesting to me on the deep level. I liked it from the investing and assets diversification standpoint, but just couldn’t see myself spending time analyzing new coins and companies behind them (almost definite recipe for disaster down the road).

Fourth – I didn’t have any time to do it! At that point, I already had multiple projects well underway (fulltime job, e-comm store and financial app), plus I was trying to help my brother Andrei to put a new spin on top of his salvage cars business. If I were to take something new I would have to either drop an existing project or cut my family time even more…

Those were important points, no doubt about that, but do you want to know what mattered the most?

I just couldn’t add any value to Mark and his project! That was it.

See, I was still a geek with 12+ years in the online tech space behind my back and if I were to take on this project, I would basically have to start from scratch. Not something I wanted to do at the moment.

My superpower is solving business problems with technology as well as building and managing remote dev teams, so if Mark needed to build out or expand his online platform, it would be a perfect fit. He would focus on being the face of the business while I would take care of the product and deliver on the back end.

It wasn’t the case though and, as painful as it was, I had to pass on the opportunity…

Do I have any regrets? Absolutely not.

Actually, the only regret I do have is that I wish I could tell him No right away… I still didn’t officially say it by the way, as it’s so hard to kill the opportunities. If Mark is reading this post by any chance, I’d like to say sorry for wasting your time…

Now that I think about it, I have another project where I promised to help out with the tech solution, but couldn’t bring myself to actually do it… Sorry, Matteo!

Bad, I know… have some work to do here.

With that said, I do believe that my millions are still waiting for me down the road.

After all, money is just the indicator of the amount of value you add to other people, not the end goal (not for me at least).

Be patient, don’t lie to yourself, do some damn work and you will get there!